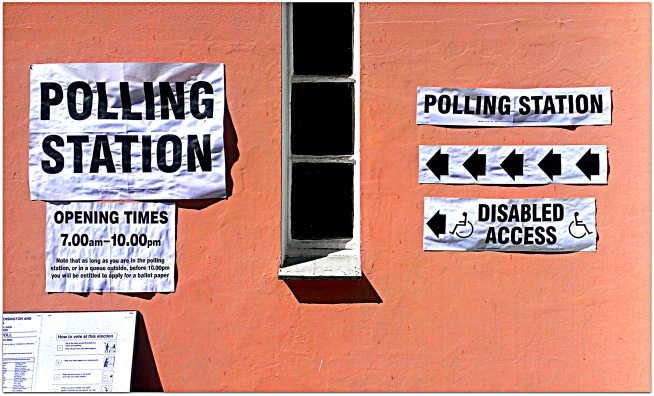 My voting ward has been reconfigured and I have a new polling station, instead of the Dalgarno Community Centre it is the local Church of England church of Saint Francis.  This made me smile when I received my voting card; in Ireland, my home country there is so much uproar about the interference of the church in state affairs I just could not imagine the reaction – not to mind the reality – of a proposal to use a sacred Catholic Church as a place to host polling for secular, read heathen, state affairs.   This was my outing today voting after an administrative side trip to my doctor’s.

Wild Bill Hickok was rallying his steers in the sky as I prepared for my 2.30 Doctor’s appointment, I managed to outrun the big fat rain drops and was grateful for the delay at the Doctor’s while this tantrum raged outside.   The sun was shining as if nothing had happened when I saddled my trusty steed and headed up to St. Francis’ church, in the freshness of the light and the pinkness of the paint this could have been an adobe walled chapel in the wild west on a lazy Sante Fe afternoon. This lovely idea was taken further when I discovered that in 1998 after the church was closed due to declining numbers ‘the Bishop approached Rev Justin Terry from St Helen’s Church, North Kensington to undertake mission to the Dalgarno Estate and try to restart the church‘.  Can’t you just see it – padres heading out in their somberos, flapping cassocks in the wind, spurring on their horses with the silver spurs of divine calling.  St Helen’s Church is all of a 10 minute walk at a stretch from St. Francis. I can but dream.

I realised as I picked up my papers I had no idea who to vote for.  I was here doing my duty by my suffragette ancestors who fought for this right, the right for me to vote to have my say.  I choose to ignore that part of my that feels I have not done enough research or paid enough attention to the electoneering campaigns and that is, in hindsight, a little guilty for recycling the various pamplets and leaflets that have come through the door.  No one seems to bother knocking the 40 flats at Coronation Court so I have no idea about the individuals standing for election.  I like to think that anyone who steps into the field of politics feels called on some level and even if misguided is willing to stand and speak for something that they believe is greater than themselves.  My choice to look at what the candidates are standing for.  When it came to the local elections Labour was calling me but looking at the European paper it was Green that was jumping out.  Sadly there weren’t any Green party candidates for the local elections but I was a little surprised; I am not usually quite so alternative, am I become more of a tree hugger or are the Greens perhaps become more practical and pragmatic?  My urge to recycle and compost is telling but I do think that the gap between the dreams and idealism of Green party politics, and the reality that people want to live in is being closed.  This is partly to do my knowledge of Grace O’Sullivan, standing for the European elections in Ireland.  Grace was with the Greenpeace’s Rainbow Warrior when it was sunk in Auckland by French Intelligence on my birthday in 1985 and she has campaigned for local environment since she returned to live in Tramore, Co. Waterford.  I see her committed to practical action and ongoing learning.  When she was asked to stand her response was ‘No, I couldn’t do it. Thank you but I’d have to compromise my principles too much.”  I would have voted for Grace if I was in Ireland.  Fingers crossed for the results.

100 Days of Awe is a playful project I set up to bring my attention to awe in my daily life. I see awe as wonder, a mixture of amazement and respect.  I expect the experience of awe to be about perception shifting awareness and that demands a reframing of some sort.  I am excited to see what will awe me on this journey.

Anne K. Scott is an imagination technologist, her work to teach, facilitate and deliver innovation for individuals and business.  She is the creator of FindYourMojo a FREE iPHone productivity app. If you are interested in what intuitive coaching can do for you please do contact me.  I support clients all over the world.